My latest for Religion in American History is essentially me extending an invitation to you to join a conversation on the role of race, racism, and white supremacy in the making of this thing we scholars call “American Catholicism.” Check it out below.

It’s October the 31st, so you all know what that means… Just twenty-one days until the American Academy of Religion’s annual meeting kicks off in Atlanta! (It also means my daughters will soon be Nemo and Marlin, but that’s a post for Facebook.) As you sit down and start planning out your time in Atlanta I want to call your attention to a roundtable conversation I’m especially excited about. Yes, I’m excited about it because I organized it, but I know it’s something many of you will be interested in as well. I want to invite you to join me and a group of stellar scholars for a roundtable conversation on “Race and White Supremacy in the Construction of American Catholicism” at 9AM on Monday, November 23 (Marriott L-405-406). 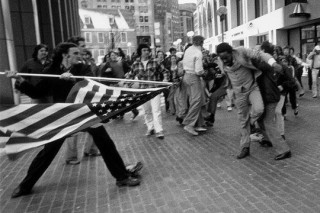 What will we be talking about? Well, here’s the short version. On the morning of Monday the 23rd, Emma Anderson, Shannen Dee Williams, Felipe Hinojosa, Kristy Nabhan-Warren, and M. Shawn Copeland will join me to think through at least two questions. What would the study of Catholicism look like if it included a sustained consideration of the ways race and white supremacy have shaped the very idea of “American Catholicism”? What consequences would such a consideration have for Catholic studies? Full disclosure: I think it would have far ranging consequences not just for the study of Catholics, but for the study of American religion writ large.

Still interested? Here’s the slightly longer version. Twelve days after Martin Luther King was killed, the newly formed Black Catholic Clergy Caucus declared in no uncertain terms that the Catholic Church in the United States is “a white racist institution.” I think it’s tempting, in hindsight, to dismiss this admittedly bold statement as anachronistic, as unhelpful, as far too uncomplicated for such a complex issue, as one example among many of the polemics of Black Power. Yet, as M. Shawn Copeland recently reminded us, willful blindness of “America’s original sin” remains the norm – and that norm includes Catholics. This is a critique Black Catholics have made, but they haven’t been alone. Latina/os, Native Americans, and others have witnessed and born witness against the violence of Catholic racism in particular. In a sense, this roundtable is asking what it would mean for scholars of Catholicism to take their collective charge seriously.I’d argue that this is a conversation scholars who study Catholics need to have because the stories we tell about Catholics contribute too often to that willful blindness. The story of Catholics in the United States is usually told as the journey from immigrant Other to “real American.” This narrative culminates with the election of John F. Kennedy and the entrance of so-called “ethnic” Catholics into the suburban middle-class mainstream. This is the story of the birth of American Catholicism, one distinguishable from Catholicisms elsewhere across the world. As Peter D’Agostino once put it, this “normative American Catholicism was [portrayed as] democratic in impulse, congregational in polity, collegial in leadership.”
Unacknowledged is the fact that this distinctively American Catholicism is premised on a racially-coded conception of American-ness. “American Catholics” tend to be innocently imagined as European immigrants and their descendants. This imagining not only marginalizes Latina/os, Native Americans, and African Americans, it also fails to interrogate the ways white Catholics have contributed to and benefited from white supremacy in America. When race and racism are considered in studies of U.S. Catholics, they tend to be considered in isolation either as the concern of those marginal(ized) communities or as the subject of studies specifically about “race.” Our roundtable intends to challenge this isolation and think through the implications of a more systematic analysis of the roles race and racism play/ed in the making of this thing we call “American Catholicism.”

So again, I want to invite you to join us in three weeks. Your presence and participation is going to be key. We’ve organized this as a “roundtable” for a reason. The session will begin with each of us offering some short reflections on the topic from the vantage point of our own scholarship. We’ll speak from different methodological perspectives (historical, theological, ethnographic) as well as from different research areas (white Catholics and Black Catholics, Native Americans and Latino/as). But then, after our reflections, we will open it up up to all the other stellar scholars in the room: namely, you. Hope to see you there soon!